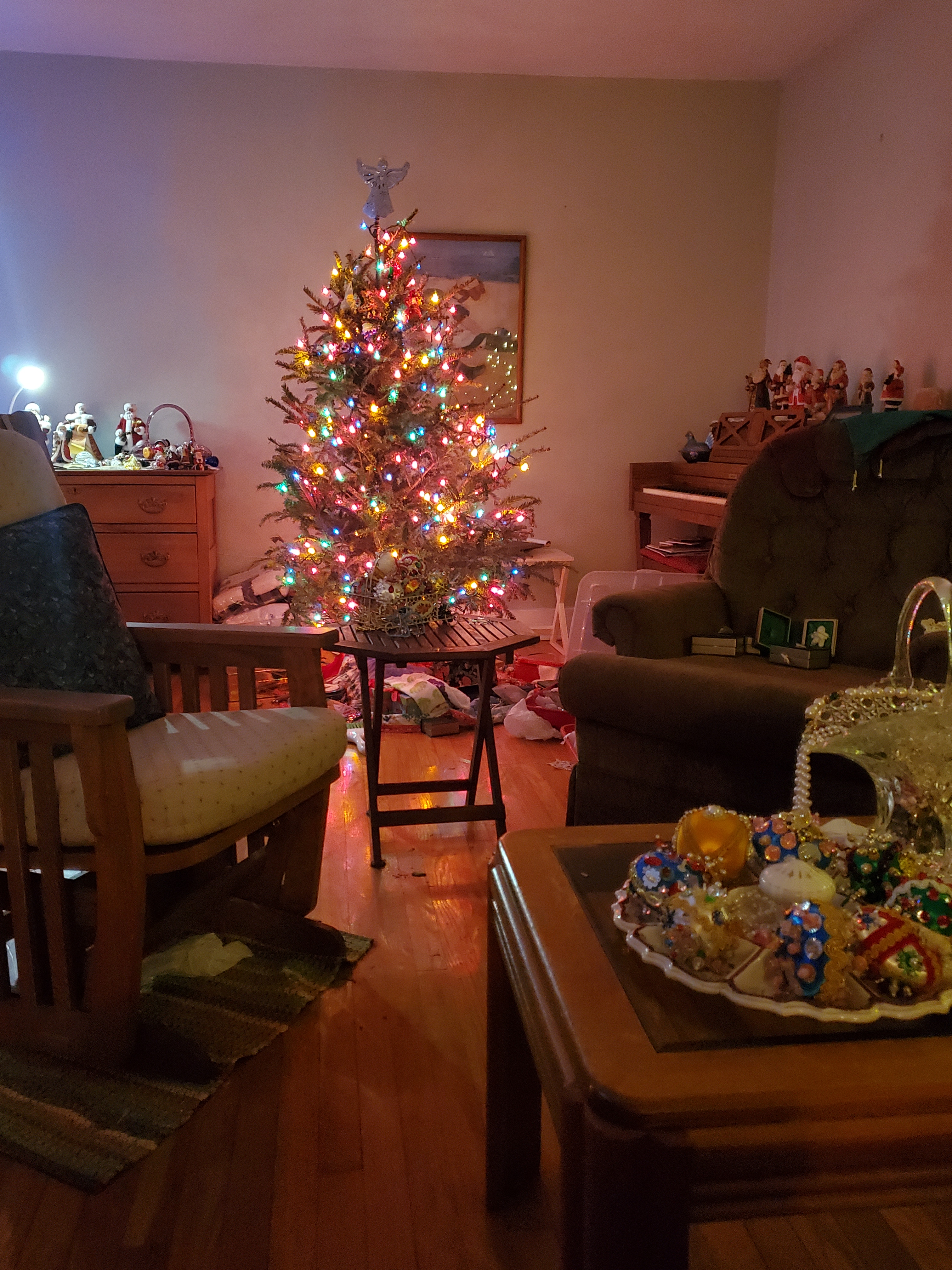 Memories of my very early Christmases are good ones. I am from a large family with fourteen aunts or uncles who married. Then the wives and husbands were part of the family. Twelve of those had children of their own. Thirteen of those did not move from our hometown. The ones who had moved came home came home for Christmas. Think about the complexity of that.

Christmas on my mother’s side was paramont even though that was the side with the most sibling rivalry and disagreements. As a young child I had no idea of the back stories. I do remember arguments, but they did not involve the children. We were caught up in the traditions. My aunt and uncle from Florida brought fireworks, oranges, and grapefuit. When are we going to do fireworks? How many times did the grown-ups hear that question? I loved the sparklers much more than the firecrackers. We opened gifts on Christmas Eve with a set time to “have the tree” which meant open gifts. All gifts were exchanged and Santa came on Christmas Eve. The reason given for that never made sense to me, even as a child. My grandfather was afraid one of his children would die in the night and not get their gifts. Think about that. Everyone gave everyone a gift, or that is how I remember it. We did not draw names or sit in a circle for dirty Santa. Are those expressions only American and southern? If you do not know what they mean, ask in a comment. I do not remember those gifts, but I do remember the anticipation.

Every one showing up at my grandparents house for Christmas dinner was mandantory. There was an oak pedestal table with many extensions for the grown-ups and card tables for the children. My daugher now has that oak petalsal and, yes, it carries memories. You did not move to the grown-up table until you married. My grandmother was a saint. She must have been tired cooking for twenty-six people, if I am counting right, and smoothing all the ruggled feathers. When did she have time to bake the coconut cakes and pecan pies? I am sure the adults’ memories of those christmases are not the same as the children’s. My older brother’s and sister’s memories are not the same as mine.

Christmas is held in the hands of grandmothers. At least, it was in mine. The passing of a grandmother changes everything. Christmas caDo not worry about presents; be present.n never be the same again no matter how much you want it to be. The harder you try, the emptier it feels. My mother wanted Christmas to be like it was when her children were grandchildren. It did not work for her or her children, but it did for her grandchildren. I envy families with smooth transitons from one generation to the next.

This year hang on to the traditons that bring comfort and let go of the ones that hurt or are stressssful. Next year when we can return to Christmas together, do the same. No matter how you wish for a different Christmas, all you have is this Christmas. Love your family and friends more than any tradition your family has or is trying to hold on to. When your family can be together, do not worry about meals; treasure breaking bread together. Do not worry about presents; be present.

Merry Christmas to all and a happy new year.

Share your thoughts on Christmas. Someone else’s blog is a good place to process.

This site uses Akismet to reduce spam. Learn how your comment data is processed.

A life-well lived is better than a song.